An Atheist Reads: The Christian Atheist Part One

What is “An Atheist Reads”?
“An Atheist Reads” is where I take the opportunity to read Christian/apologetic compositions and discern whether or not the arguments contained within have merit. No, I’m not sure if I’ll ever get around to Thomas Aquinas but I’ll probably do a review of God’s Not Dead. Wish me luck on that endeavor.

In this review, I’ll be taking on the Introduction and Chapters One thorough Four of The Christian Atheist. All Chapters in this book start out with the tagline “When You Believe In God but” so I’ll simply refer to the chapters with the latter part of the description, as including all of the chapter titles would be awkward.

Groeshel starts out his book by telling people that he himself was a christian atheist; someone who believed in god but lived as though he wasn’t real. There’s only one massive problem with this: that’s not what a christian atheist truly is. What Groeschel describes seems to be a lapsed or fallen christian, namely someone who is a believer but doesn’t “walk the walk”. And Groeschel says he was one of them; sure, he believed but he lived like god wasn’t watching. Or at least he did until he was in college, when he became an admitted “wacko” and heard the voice of god while in a softball field.

And here’s where we run into the first problem.

What Groeschel describes is a personal experience which cannot be proven or dis-proven. To Groeschel, this was real and tangible but to those centered in  science, it’s utterly meaningless. To someone who has training in mental health services, it’s more than a little alarming. We’ve all heard that saying: “When you talk to god, it’s prayer. When god talks to you, it’s schizophrenia.” Make of that as you will. But after that incident, he became a full-on fanatic and asks the reader if any of this resonates. Because to be a happy, healthy whole person, you have to Jesus full-time and not part-time. With that out of the way, he invites you to come and get to know his god so that you can be just as Jesus happy as Groeschel. So let’s begin.

Chapter One “Don’t Really Know Him” likens a relationship with god to that of a spouse; both of you have to “get to know each other” in order to have this wonderful relationship. However, it’s best if you don’t give god a cutesy nickname, as that makes light of this wonderful, loving relationship that will make you a better person.

To be quite honest, there really isn’t anything of true substance here. Groeschel basically says you’ll be a better person, far more generous and just plainly happier but again, this is all personal. Even worse, the entire chapter comes across as creepy; we’re basically being encouraged to see god in the same light that Groeschel sees his wife! I couldn’t take this chapter seriously, as it started with a “How I Met My Future Mate” story yet said later on, no cutesy nicknames as god is “bigger” than all that. Well, which is it? Either god is close enough to us to warrant a nickname or he’s bigger than all of that and pretty much unknowable. Nothing in this was the least bit convincing to me, so I felt absolutely no tug towards believing in the god that Groeschel loves so much. Or maybe my heart isn’t open enough. Who knows?

In Chapter Two “Are Ashamed of Your Past”, Groeschel tells the story of Missy, his first crush who also happens to be a psychopath and asks him whether or not she should kill a helpless frog with a rusty Folgers can. Groeschel agrees and Missy crushes the poor creature death, which causes Groeschel to spiral into a depressive fit. Sure, he’d done some naughty things before but this was the worst and if only people knew, they wouldn’t like him.

I’m going to be honest here: learning this certainly made me not like this guy. Even at a young age, crushing a vertebrate animal was abhorrent to me so yeah, he should have been plenty ashamed. But we can’t really pass judgement, as everyone has screwed up and should be ashamed. Hell, even King David screwed up and god forgave him!

Not exactly. God killed David’s baby. Groeschel pretty much left that part out of the story.

But it gets worse: Groeschel admits that he cheated with his best friend’s girlfriend while in college, when he wasn’t a “true” christian. Because magical Jesus powers prevent that sort of thing–newsflash, they actually don’t. If you don’t believe me, just do a quickie Google check. But even though he was ashamed he owned up to his past and god helped him get past the shame. He even goes so far as to say that god fixed him but the cynic in me has doubts.

Again, there is not a lot of true substance in this portion of the book. It’s basically there to make people feel better about themselves and pull them into Groeschel’s church. I’m not saying that people should walk about in a state of permanent embarrassment but if you’re going to let go of your shame, it should be because you learned from the screw up. If you feel ashamed, you should try to be a better person and not repeat what you did before that made you feel terrible. But that’s common sense and doesn’t sell books.

The third chapter “Aren’t Sure He Loves You” is absolute fluff. It’s basically a bunch of assurances that yes, god loves you. There are parables and that sort of thing along with the usual personal stories but nothing of any true substance. It doesn’t really even deserve the mention that I’m giving it. It’s the fourth chapter where things get interesting.

Chapter Four is titled “Not In Prayer” and this is where Groeschel tries to convince the reader that yes, prayer works. All the time! Hey, his kids prayed for a dog and–praise Jesus!!–someone dumped a puppy not too far from their house and it ended up on the family doorstep! So yes, god listens to and answers prayers!

Or not. It all depends on whether or not you’re praying for the right reasons. Or if it’s in god’s plan. Or if it’s for something selfish. Or if you’re not Jesusing right. Or a variety of other reasons. Groeschel rubs even more salt in the wounds by saying that he understands that “unanswered prayers can be frustrating” but that is an understatement. In some cases–like faith healing–they can be downright fatal. And how exactly does Groeschel “know” that what people are praying for is selfish? My mother-in-law prayed for her middle child who was diagnosed with cancer. She wanted him to live because he had children and people who cared about him. Those prayers went unanswered and he died. I myself spent nearly a year in nightly prayer for my ex-boyfriend; I begged for him to be healed of his depression. It didn’t work and if anything, it got worse: my ex was diagnosed with Asperger’s in 2005. He’s now jobless and living at home with his mother. God didn’t see fit to help him, even though I tearfully begged that god do something for my ex. Groeschel even uses the acronym PUSH, which stands for Pray Until Something Happens. A lot of people have and those prayers have seemingly fallen on cosmic deaf ears. Does Groeschel really believe that all of these people are selfish or doing it wrong?

This chapter did have an affect on me: it made me want to throw the book across the room or throw the book across the room and tear my hair out. Not only is this a chapter filled with empty platitudes it also goes straight into victim blaming, saying that if nothing happens you did it wrong or god knew better than you. If the prayer fails, it’s because god’s will is greater than yours and he knew best. You can’t hold god accountable because he’s omniscient and knows better than we do. But on the other hand, even though he’s all powerful god’s not the cause of the cancer that my brother-in-law developed. But he didn’t cure that cancer because that wasn’t in his grand plans. There’s only one way for me to put this: 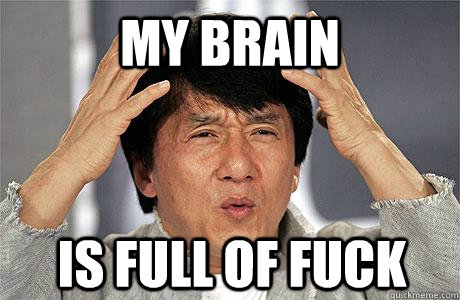 And something tells me that this won’t get any better so if you can stand it, head on back here for part two… if I can type this out without my brain snapping in half. Until next time.

I'm a Transformers fan, Pokémon player, Brewers fan and all-out general nerd. I rescue abandoned Golett, collect as many Bumblebee decoys and figures as I can find and I've attended every BotCon--official and non--since 1999. I'm also happily married to a fellow Transfan named Prime and we were both owned by a very intelligent half-Siamese cat, who crossed the Rainbow Bridge on June 16, 2018. We still miss him. But we're now the acting staff of a Maine Coon kitty named Lulu, who pretty much rules the house. Not that we're complaining about that.
View all posts by Silverwynde →
This entry was posted in An Atheist Reads and tagged Atheism, books, Christian Atheist, christianity, Craig Groeschel, Reading. Bookmark the permalink.