(Not) Playing it Straight

You don’t? I remember it and remember it very well. It happened constantly on Saturday mornings and it was never seen as a problem. Why? Because the characters who took part in this were straight and it was all played for laughs.

I grew up on Saturday morning cartoons. They were a staple of my childhood; I’m willing to bet that they were probably a staple of a lot of people’s childhoods. So I was exposed to a lot of same sex kissing. Like this: 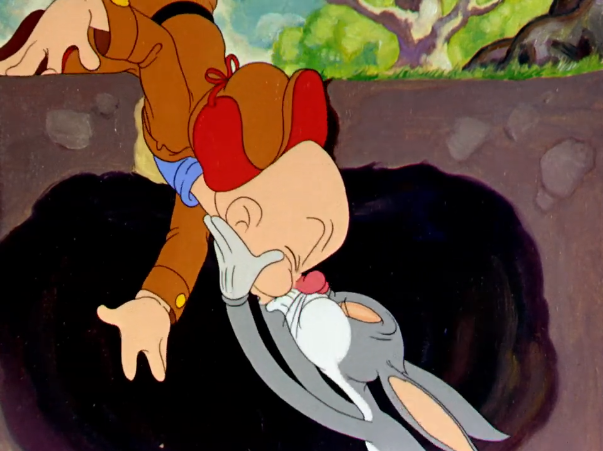 It was absolutely common for me to see this while watching Looney Tunes or Merrie Melodies. It wasn’t seen as deviant or sexual; it was basically just Bugs Bunny pissing off the villain of the day. How did you know that? Well, the reactions of Elmer and Yosemite were fairly obvious; the growls of anger, the looks of rage, you get the idea. There wasn’t anything sexual about it. It was done just to irritate these guys and it worked every single time.

So when you think about it, I was more or less raised on same sex kissing. I just didn’t know it at the time and didn’t see it as anything sexual in nature.

When I was a teenager, I also saw a same sex kiss on the big screen back in 1988: 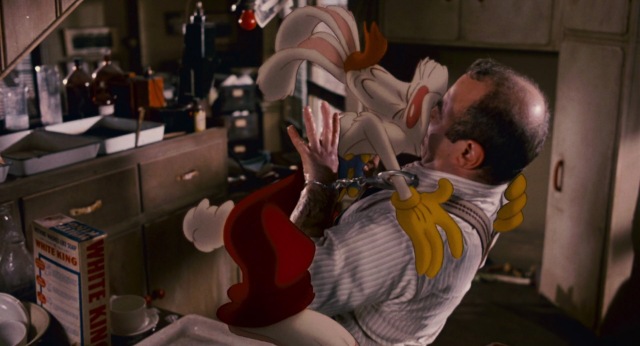 This is probably one of the most famous scenes in the entire movie. It was revisited during the resolution, with Eddie turning the tables on Roger. It’s so well-known that it and variations of it showed up on promotional stills for the film. The cover to my VHS copy? It featured Roger kissing Eddie on the cheek. That scene was everywhere and everyone saw it. It was blatant but there was nothing at all controversial about it.

Why? Because all of these characters are straight, that’s why.

In all these instances, this is being played for laughs. It’s a comedic effect and isn’t serious, therefore it isn’t seen as threatening. We know that Yosemite, Elmer and Bugs are all straight, so what happens with these three can be hand-waved away. It’s the same with Roger and Eddie; Roger Rabbit is married to Jessica while Eddie Valiant is involved with his girl Friday Dolores. Both of these characters are straight so any lip action between the two can be downplayed as an accident or simply played for comedic effect. We know that deep down, there aren’t any of “those” feelings involved with that sort of kiss. It might be same sex, but it’s not serious. At the end of the day, Eddie and Roger aren’t going to climb into Valiant’s Murphy bed together unless it’s played as a joke. The two are straight. When it isn’t serious, it isn’t threatening so it’s given a pass.

Which leads us here: according to one church, gay people do not exist. I’m serious. According to this church, there are no gay people, just straight people who take part in “‘unseemly’ acts of immorality.” To them, the default is that everyone is straight and if you happen to be gay? Well, you’re just confused and being influenced by Satan, is all! Some good ole fashioned prayer–along with some straight married sex perhaps–will cure this in a moment! Gay people simply don’t exist but the sin of sexual immorality? That’s very real and can cost someone his/her immortal soul. You cannot make this sort of thing up.

But unlike the innuendo from a 1940s cartoon, a gay person can’t be hand-waved away. They actually exist, unlike Bugs Bunny or (sadly) Roger Rabbit. Unlike a terrible idea like sin, gay people are real; we can see them, we can interact with them, we can talk to them. Gay is a thing that exists, while the idea that this church has is not.

If the sin of sexual immorality was a thing, I’d be extremely gay by now, considering how many times I saw Bugs lip locking with Elmer Fudd. I shouldn’t be married to a male, I should have been married to a woman, as I saw a male rabbit kissing another male. But again, life doesn’t work that way; being gay isn’t a choice. Being gay isn’t an act of immorality. Being gay is simply who someone is, that’s all. The idea of sin and Satan have nothing to do with this. They never did. But try telling that to the members of this church.

Now if you’ll excuse me, I think I’ll go hunt down my copy of Who Framed Roger Rabbit? in order to damn my “immortal soul”. Or maybe I’ll just binge some Looney Tunes in order to warp myself. Anything to make these poor guys’ heads asplode, which wouldn’t take much.

I'm a Transformers fan, Pokémon player, Brewers fan and all-out general nerd. I rescue abandoned Golett, collect as many Bumblebee decoys and figures as I can find and I've attended every BotCon--official and non--since 1999. I'm also happily married to a fellow Transfan named Prime and we were both owned by a very intelligent half-Siamese cat, who crossed the Rainbow Bridge on June 16, 2018. We still miss him. But we're now the acting staff of a Maine Coon kitty named Lulu, who pretty much rules the house. Not that we're complaining about that.
View all posts by Silverwynde →
This entry was posted in Cartoon Logic, LGBTQ, Religion, Sex And Gender Acceptance and tagged animation, Bigotry, Cartoon Logic, cartoons, christianity, homophobia, LGBTQ, pop culture, Religion, SAGA, Saturday mornings, the lies we tell ourselves, This Is A Thing That Exists, what is this I don't even, WTF, You Can't Make This Shit Up, You have got to be kidding me. Bookmark the permalink.

1 Response to (Not) Playing it Straight