An Open Letter to a Former Senator

Please shut the hell up.

I know you think that you are trying to help, but suggesting that kids should learn CPR and not boycott the NRA when it comes to mass shootings is stupid and it makes you look stupider than you already are. Now, you’ve already tried to walk it back by saying that you misspoke, but the damage was done. The internet never forgets. And you’ve been raked across the coals for saying something that can best be described as dumber than shit. For obvious reasons.

CPR isn’t going to help a gunshot wound. It will not save a victim of a mass shooting. Hell, ten to one it won’t save the sole victim of a random act of gun violence. Why? Because CPR is used to keep someone’s brain functioning when their heart has stopped. It will do absolutely nothing for someone who is bleeding to death.

How do I know this? Well, we had a shooting where I worked. The victim was shot point blank in the abdomen. Her heart didn’t stop but she very nearly bled to death while the first responders were en route. When she arrived at the hospital, she had no blood pressure. None.

What saved her life? A blood transfusion. One that required a hundred units of blood. Her heart was fine. Pounding on her chest would have done nothing, except maybe speed up the process of her hemorrhaging.

So do us all a favor. Shut up. And once you’ve shut up, shut up again. Then keep shutting up until you’re back to this point in time. Then shut the flying fuck up yet again. Or to put it in a way you might understand: 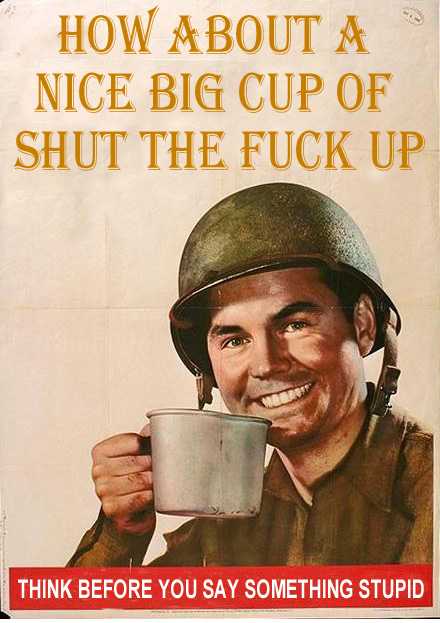 Then maybe you wouldn’t look like such a dumbass.

I'm a Transformers fan, Pokémon player, Brewers fan and all-out general nerd. I rescue abandoned Golett, collect as many Bumblebee decoys and figures as I can find and I've attended every BotCon--official and non--since 1999. I'm also happily married to a fellow Transfan named Prime and we were both owned by a very intelligent half-Siamese cat, who crossed the Rainbow Bridge on June 16, 2018. We still miss him. But we're now the acting staff of a Maine Coon kitty named Lulu, who pretty much rules the house. Not that we're complaining about that.
View all posts by Silverwynde →
This entry was posted in An Open Letter and tagged Are you effing kidding me?, Are you that effing stupid?!, Current Events, Douchebaggery, dumbassery, Frothy Mix, gun control, Guns, Mass Shootings, Politics, STFU, stupidity, this fucking guy. Bookmark the permalink.