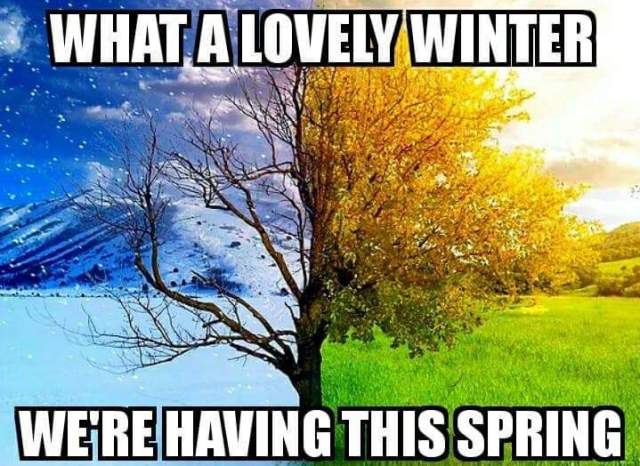 That’s not a joke, either.

I think we’ve gotten more snow in the last two months than we did during the entire winter. As of right now, we’re still getting snow, on top of gusty winds. It’s a full-bore winter storm in the middle of April. This weather sucks.

I feel like hell. Tired, cranky and just frustrated. Part of this is the weather. Part of this is my medication. Part of this is not having a convention. I went through my Twitter feed and started unfollowing users that either hadn’t tweeted in years or I had no reason to follow. One of the accounts I was following? The Transformers Collectors Club.

Winter doesn’t want to end, in more ways than one.

I'm a Transformers fan, Pokémon player, Brewers fan and all-out general nerd. I rescue abandoned Golett, collect as many Bumblebee decoys and figures as I can find and I've attended every BotCon--official and non--since 1999. I'm also happily married to a fellow Transfan named Prime and we were both owned by a very intelligent half-Siamese cat, who crossed the Rainbow Bridge on June 16, 2018. We still miss him. But we're now the acting staff of a Maine Coon kitty named Lulu, who pretty much rules the house. Not that we're complaining about that.
View all posts by Silverwynde →
This entry was posted in And Now For Something Completely Different, Bullshit and tagged And today in WTF, Fuck this I'm done, Transformers, Twitter, Weather, Wisconsin. Bookmark the permalink.