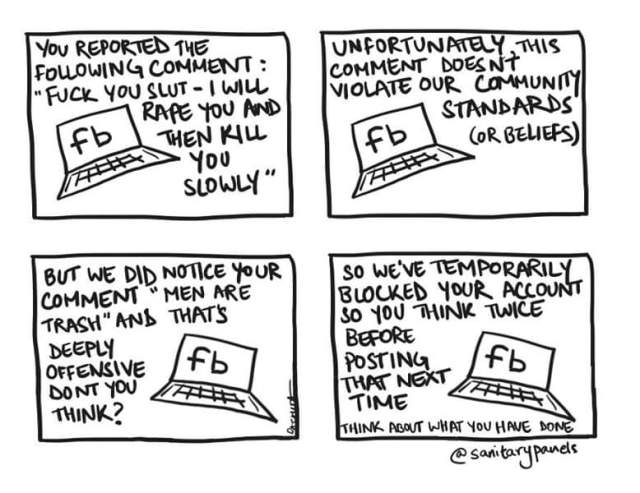 Welcome to Facebook. Leave your brain at the door. Your common sense, too.

As of right now, I am sipping a cup of coffee, something I haven’t done since Sammy was sick. It’s been months since I’ve had coffee; after losing Sammy I just couldn’t justify it. But now, I need it. Oh wow, do I ever.

Now, this is coming on the heels of that lovely little article, you might have seen it: it’s the one that basically tells us that Facebook itself was behind some of that “fake news”. It seems Zuckie decided to work with a conservative group and claim that if you weren’t pro-Facebook, you were working for–GASP!!–George Soros!

Again, my sabbatical grows. When the 24 hours are up, I’ll share this with a number of my Facebook friends. But I doubt that I’m going to use Facebook for anything anymore. Check-ins at Brewers games? Not happening. Check-ins at Timber Rattlers games? Nope. Shares from Patheos? A thing of the past. Clicking aimlessly around on my timeline? I have better things to do. Zuck can get his ad revenue elsewhere. Fuck Facebook and fuck Zuck.

On the bright side, this will give me more time to blog. It’s a much better usage of my time.

Damn, it’s been so long, I almost forgot how awesome coffee tastes in the morning. I’ll never let that happen again.

I'm a Transformers fan, Pokémon player, Brewers fan and all-out general nerd. I rescue abandoned Golett, collect as many Bumblebee decoys and figures as I can find and I've attended every BotCon--official and non--since 1999. I'm also happily married to a fellow Transfan named Prime and we were both owned by a very intelligent half-Siamese cat, who crossed the Rainbow Bridge on June 16, 2018. We still miss him. But we're now the acting staff of a Maine Coon kitty named Lulu, who pretty much rules the house. Not that we're complaining about that.
View all posts by Silverwynde →
This entry was posted in Bullshit, Facebook and tagged #FacebookIsTrash, #FuckFacebook, #FuckZuck, anti-social media, Fuck social media, Zark Fuckerberg. Bookmark the permalink.