Pain in the Skidplate 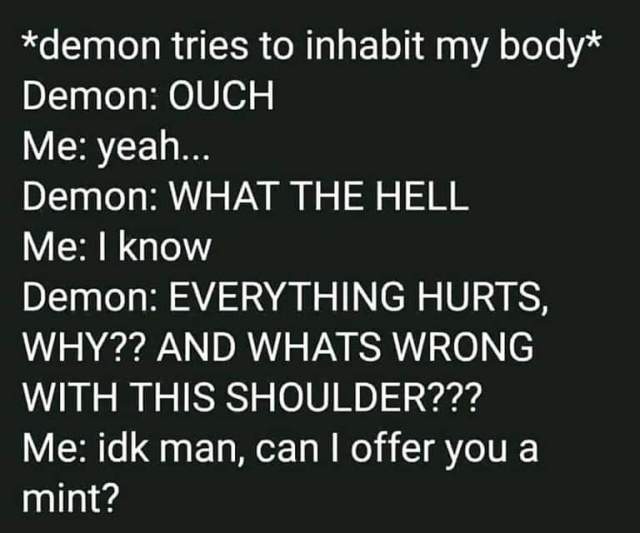 This is so true it hurts. Both literally and figuratively.

So I ran into one of my former co-workers today; we weren’t able to chat for too long but what she told me certainly was interesting. She’s no longer working there and it looks as though most everyone who was are gone. There are a couple of holdouts, but not many. The company has changed so much–and not for the better–that nearly everybody there has found something else. Normally, I’d say that this was rather sad, seeing so many people leaving the old store behind but right now, I can’t. It’s better this way. They don’t have to deal with the abuse that Wal-Mart and their inept management love to pile on the decent, caring associates. That place was rapidly becoming toxic and I for one am glad that they did me the favor of shitting me out the door. Piss be upon them.

It was relatively busy today. Being the end of November is probably why. We have 24 days left until Christmas, so everyone is stressed and trying to get the last minute gifts and such. It’s the same thing every single year.

However, it was quiet by the door; Wiesia wasn’t there. For once. Unfortunately, she’ll be back tomorrow and I rather dread having to deal with her. Maybe I’ll be lucky enough to not have to deal with her attitude. We’ll see.

I'm a Transformers fan, Pokémon player, Brewers fan and all-out general nerd. I rescue abandoned Golett, collect as many Bumblebee decoys and figures as I can find and I've attended every BotCon--official and non--since 1999. I'm also happily married to a fellow Transfan named Prime and we were both owned by a very intelligent half-Siamese cat, who crossed the Rainbow Bridge on June 16, 2018. We still miss him. But we're now the acting staff of a Maine Coon kitty named Lulu, who pretty much rules the house. Not that we're complaining about that.
View all posts by Silverwynde →
This entry was posted in And Now For Something Completely Different and tagged Random Thoughts, Wal-Mart, Work. Bookmark the permalink.