There’s a reason why this post is a little late; Prime and I just walked in the door not twenty minutes ago. We were at the Fox Club in beautiful Fox Cities Stadium, taking in yet another Timber Rattlers game.

It was a lovely night for baseball, if a bit cool.

I’m not sure when this happened, but it appears that one of the glass panels on the Club took a pretty bad hit from a foul ball. Prime suggested that this might get repaired when the TRats hit the road; I could see that as a possibility.

A shot of the field during warm-ups. As you can see, it was a very nice day, but the wind was a bit chilly. It’s May and I’m wondering when we’re going to warm up! (Not any time this week, as we may get snow in the north tomorrow and a wintry mix in other places. I’m not kidding.)

The gateway before game time. As you can see, it wasn’t very busy. The Club was almost deserted; Prime and I had our choice of tables to watch the game.

Although the weather was nice, we didn’t have a lot of spectators in the stadium tonight. I’m guessing that everyone is waiting for higher temperatures. 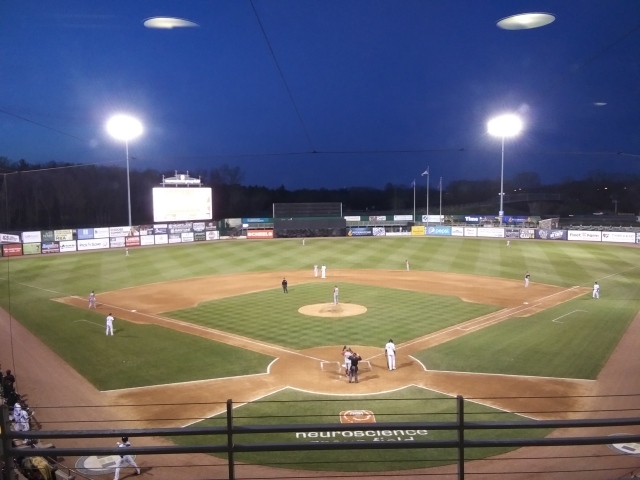 Some action on the field. We were dealing with a pitcher’s duel, so the game was rather low scoring.

After the last out in the top of the ninth. The Timber Rattlers got a win, which is always awesome. ❤

I'm a Transformers fan, Pokémon player, Brewers fan and all-out general nerd. I rescue abandoned Golett, collect as many Bumblebee decoys and figures as I can find and I've attended every BotCon since 1999. I'm also happily married to a fellow Transfan named Prime and we were both owned by a very intelligent half-Siamese cat, who crossed the Rainbow Bridge on June 16, 2018. We still miss him. But we're now the acting staff of a Maine Coon kitty named Lulu, who pretty much rules the house. Not that we're complaining about that.
View all posts by Silverwynde →
This entry was posted in Baseball and tagged awesome-sauce, Back to the Minors, Baseball, Beer and brats and baseball, Summer in Wisconsin, This is what I live for, Timber Rattlers. Bookmark the permalink.