Posted on September 5, 2019 by Silverwynde 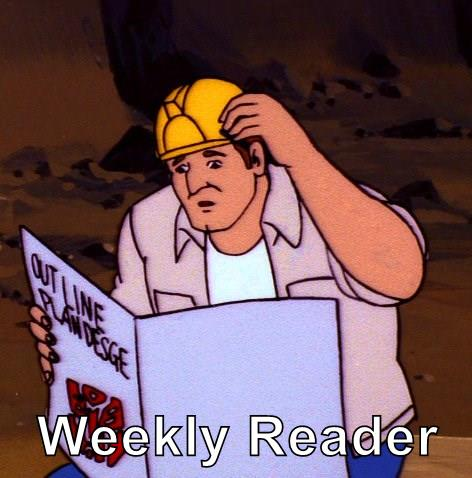 It’s time once more for all the news and views that you can peruse! It’s another Weekly Reader! As always, if you want to be part of the action, drop a link or three in the comments! Those are always welcome.

Bret Stephens, Donald Trump and the epidemic of male fragility (from The Chicago Tribune): “The most remarkable thing about most of these men and their Fabergé-egg-like egos is they’re often the first to gripe about the ills of “political correctness.””

Jeffrey Epstein and the Power of Networks (from Wired): “Epstein was, in the parlance of the sciences, a marker. Like the radioactive tracer you get injected with before an fMRI, his villainy illuminates how the connections among a relatively small clique of American intellectuals allowed them, privately, to define the last three decades of science, technology, and culture. It was a Big-Ideas Industrial Complex of conferences, research institutions, virtual salons, and even magazines, and Jeffrey Epstein bought his way in.”

Uber And Lyft Don’t Have A Right To Exist (from Jalopnik): “The petition includes a series of lame offers from the ridehail companies that ring hollow to anyone familiar with their business. Moreover, it only underscores the need for AB5 to apply to rideshare drivers, because it demonstrates Uber and Lyft still don’t get the problem that is trying to be solved, that of their incongruous existence.”

Trump Administration Ends Protection For Migrants’ Medical Care (from NPR): “The Sanchez family entered the U.S. on tourist visas in 2016 and was first able to extend. But the treatment was longer than the six-month extension so the family applied for medical deferred action in November. Now, the teen said he is feeling stressed and scared he might need to leave the U.S.

“If they deny the program, then I need to go back to my country, and I’ll probably die because in my country, there’s no treatment for [cystic fibrosis],” Sanchez said, crying and trying to catch his breath. “Doctors don’t even know what’s the disease. The only ones who can help me are here in the United States.””

Happy “I’m Sorry We Shot Those Strikers” Day! (from Love Joy Feminism via Patheos): “Yes, you did read that correctly—Labor Day was the federal government’s way of saying sorry for intervening in the Pullman strike by sending federal troops to Chicago and killing several dozen strikers.”

I am a bedbug and would like to be kept out of this mess (from The Washington Post): “I am just trying to live my life. Instead, I have been thrust into a story I never asked to be part of. This is not my fight, and I don’t know any of the people involved. Please, stop using me to insult people. I don’t know these people. I don’t know anything other than that some of them emit kairomones and I need to make use of them for a blood meal to escape my final nymphal stage. That’s it. So stop invoking my name! Fight your own battles.”

All the Worst White People Love Dave Chappelle’s Sticks and Stones (from Very Smart Brothas): “That said, there are also many who consider this to be one of his best performances. And among that group are trolls, professional bigots, white supremacists, Nazi sympathizers and more of the very worst white people; an adoration due to the parallels between their sensibilities and his.”

She reported her sexual assault. Her high school suspended her for ‘sexual impropriety.’ (from The Lily): “That policy applies even to alleged victims of sexual assault, per a complaint filed Friday against the Fayette County Board of Education in Fayetteville, Ga., and several senior school officials. When a 16-year old female student, cited in the complaint as “A.P.,” told administrators that she was sexually assaulted, coerced into performing oral sex on a male classmate, she was expelled for the rest of the school year.

The ultra-rich are illegally buying cheetahs as pets and it’s leading to their extinction (from CNN): “The overwhelming majority of these cheetahs end up in Gulf Arab mansions, where Africa’s most endangered big cats are flaunted as status symbols of the ultra-rich and paraded around in social media posts, according to CCF and trafficking specialists.

In one such post, a video shows a “pet” cheetah watching a National Geographic show and becoming visibly agitated when it sees one of its own on the screen. “She’s fixated on her family,” reads the caption. Other posts show cheetahs laying on luxury cars, being shoved into pools, getting force-fed ice cream and lollipops, and being taunted by a group of men. One cheetah is seen getting declawed; another is dying on camera.”

A boy with autism wouldn’t sit still on a United Airlines flight. So crew and passengers stepped in to help. (from CNN): “Just before leaving, the off-duty flight attendant who was sitting across from them gave Gabriel a hug and a handwritten note in which she commended her for her strength. “You and your family are loved and supported,” reads the note.”

And that’s all for this week. Stop by again for another info-dump of massive proportions. So until then, happy reading!