There’s a good reason why I waited on this; this week happens to be the week of Dan Gilvezan’s birthday. So why not wait until now to post this as a way of saying thank you? Oh, and happy (early) birthday, of course.

You might remember me mentioning that I wasn’t a Transformers fan from the start; I wasn’t exactly fond of the idea of a mechanoid having an alt-mode. It took my viewing of the multi-parter “More Than Meets the Eye” to draw me into the universe of shape shifting robots.

But I wasn’t quite a fan. At least, not right then.

No, what truly cemented me as a fan was this little guy and the fourth episode of the series. 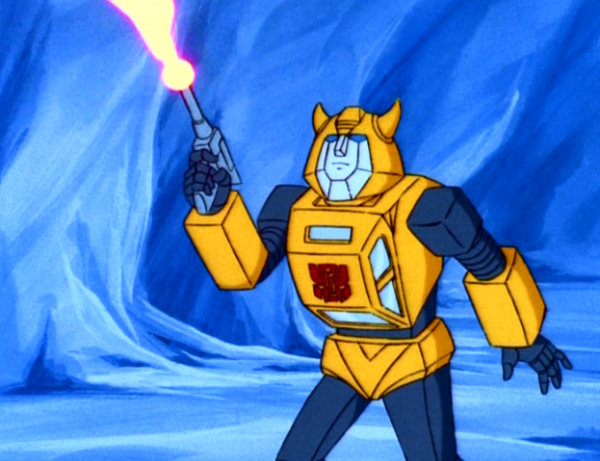 It was Bumblebee who pulled me in and made me the fan I am today. He did it in one moment, with one simple declaration.

In that episode, Spike Witwicky ends up captured by the Decepticons and is about to be used as a guinea pig, sent to Cybertron via untested technology. During the course of the story, Spike tells Bumblebee to save himself and get help, which eats away at the little Autobot. He’s guilty of abandoning a friend and it’s killing him. But towards the conclusion of the story, he has a chance to make things right.

Bumblebee does just that, saying that he got Spike into it, but he was going to get him out.

To catch a glimpse of Bumblebee meant watching every episode. Which I did. My eyes scanned every Autobot group shot, looking for a bit of bright yellow. When I heard that voice, Bumblebee’s voice, I couldn’t help but smile. From a distance, from the other side of the television, from a different universe, I loved him. He was the single biggest influence on my life; I tried to model my behavior after his. I didn’t just love him, I wanted to be him.

Bumblebee was brave. He was loyal. He took absolutely no slag from someone talking badly about one of his friends. If you had Bumblebee in your corner, you had a friend for life, someone who wanted nothing more than to protect you. He was a bit of a smart aleck but he was sweet and friendly.

Basically, Bumblebee was the guy next door; he wasn’t the strongest, but he made up for it by being the bravest. To me, Bumblebee was quite literally the perfect guy and I knew if I could just meet him, we’d have been the best of friends.

As the years trickled by, Bumblebee became something a little more: he became a guardian angel to me. In 1989, five years after I first saw the original Transformers cartoon and after a hellish day at high school, I stumbled upon a Legends Bumblebee at my local Kmart. I remembered him, and with the few dollars in my wallet, I bought him. A small action figure, who became an anchor during my teenage years, he kept me calm when my life took a turn for the weirder. Several years after that, I managed to get my hands on an Action Master Bumblebee, who resembled his cartoon appearance. That little guy is the reason I’m a married woman; back in the 1990s, he took a tumble off my desk and I mentioned it on the Cybertronian Conference.

The next day, I had an email from a member known as Prime. “It’s that top-heavy thing, isn’t it?” the message began. I chuckled and responded in kind.

Bumblebee found me a husband. It sounds crazy, but he’s the one who managed to get me married. He even made an appearance at the wedding; when Prime and I arrived at our hotel in North Carolina, there was a yellow Camaro sitting in the parking lot. Movie Bumblebee had decided to drop by and make sure that the ceremony would go off without a hitch. I was giggling about it for nearly a day afterwards.

Trust me, the ceremony went well; it’s been a decade and Prime and I are still together. Bumblebee found a good man and for that I am grateful. But I wouldn’t be wearing a wedding band if not for him.

One simple sentence and I was in love. One little Autobot and I’m a married woman. I owe a lot to Bumblebee; I could spend days trying to post it all and I don’t think I could say everything. Some say that their guardian angel has paws, others claim theirs have wings.

In my case, my guardian angel has wheels. Believe me, I wouldn’t have it any other way.

I'm a Transformers fan, Pokémon player, Brewers fan and all-out general nerd. I rescue abandoned Golett, collect as many Bumblebee decoys and figures as I can find and I've attended every BotCon--official and non--since 1999. I'm also happily married to a fellow Transfan named Prime and we were both owned by a very intelligent half-Siamese cat, who crossed the Rainbow Bridge on June 16, 2018. We still miss him. But we're now the acting staff of a Maine Coon kitty named Lulu, who pretty much rules the house. Not that we're complaining about that.
View all posts by Silverwynde →
This entry was posted in Transformers Tuesday and tagged Bumblebee, Dan Gilvezan, Thirty Five Years Thirty Five Thoughts, Transformers, Transformers cartoons. Bookmark the permalink.