I spent most of that night, sitting on the front steps of my friend’s house, staring at the sky while fighting tears. Only after I had been gone for ten minutes, did my ex finally say, “Is she upset?”

That was the night I had thought that I would be getting Dreadwing, a recent release in the Generation 2 line. I had been adamant about it, telling my ex that this was what I wanted. Because, honestly, this guy looked like a total badass. 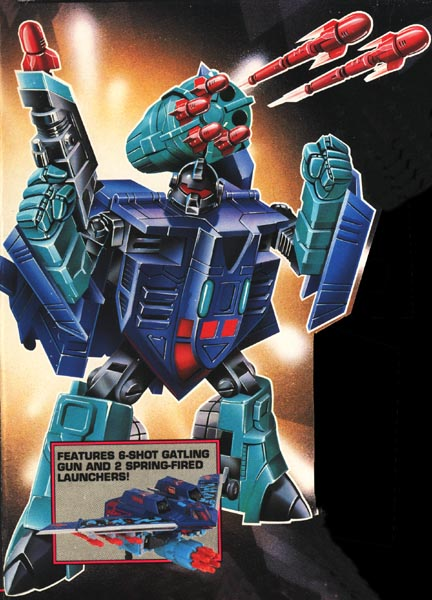 Like I said, total badass. I also needed more Decepticons, as they were sorely outmatched. I didn’t have a job in 1994, so I didn’t have a lot of money to spend on myself; getting Dreadwing as a gift would take some pressure off of me.

My ex assured me that I would love my gift: it was special, he said. I’d be so happy when I opened it. He just hated waiting because he wanted so badly to see my reaction. My ex spent days talking it up, so I was damned confident that he’d gotten the hint, that he’d actually managed to get me Dreadwing.

Now, at the time, my friends and I held a Holiday party at one of our friends’ homes. It coincided with the Animal Shelter Xmas party that was held every year, so as to avoid parents and the like. On that night, I bundled up my gifts, hopped into one of my friend’s cars, and headed over, so excited that I could barely sit still. The ex had been crowing about how great his gift for me was and I couldn’t wait to open up Dreadwing.

We got to our friend’s place and went inside; the gift exchange was later in the festivities and the ex insisted that his special gift for me was to be last. I was giddy and excited and could hardly wait to see what I would get.

Then the moment came.

I was more than a little confused to see my ex and his friend lugging a large cardboard box towards me. Shouldn’t he have simply wrapped up the original package? Then, he looked at his friend, did a three count, reached into the box and started singing, “On the first day of Yaksmas…”

His “ultra special, super awesome, there was no way in hell I wouldn’t love it” gift was a joke. No, I can’t even call it a gag gift. It was a fucking joke.

Of course he laughed at me being pissed. Then I asked if that was truly the last present he had for me. He seemed puzzled, but admitted it was.

That’s when I excused myself and sat on the front porch. To this day, I don’t know how I was able to keep myself calm. I just knew that I couldn’t be anywhere near him.

On the way home from the party, my ex, to his credit, did apologize. He had believed the whole thing would be harmless fun. I finally told him that I was extremely upset; I had been very direct with what I had wanted–you didn’t drop hints with him because he didn’t understand them–and that had been turned into a terrible joke.

Again, to his credit, he did finally buy Dreadwing for me, which I thanked him. But it still stung.

Dreadwing was a symptom of a larger problem: my ex really never took anything about our relationship seriously. To him, it was all a joke. He lacked empty and the capacity to understand why the whole incident was upsetting to me. At the time, I didn’t know as to why he was the way he was; the exact cause came later.

My ex was autistic. For him, the idea of seeing things through my eyes was a foreign idea. This was why he couldn’t take a hint, why I had to be so direct with him. This was why he never bought a gift on a whim, but waited for a calendar holiday. It explained his lack of tact and common sense. He couldn’t help it.

Most women would have seen that as an excuse to break up with him and move on. Me, I didn’t, as I was far too forgiving. No, that would come later, with my collection as a coping mechanism.

I'm a Transformers fan, Pokémon player, Brewers fan and all-out general nerd. I rescue abandoned Golett, collect as many Bumblebee decoys and figures as I can find and I've attended every BotCon--official and non--since 1999. I'm also happily married to a fellow Transfan named Prime and we were both owned by a very intelligent half-Siamese cat, who crossed the Rainbow Bridge on June 16, 2018. We still miss him. But we're now the acting staff of a Maine Coon kitty named Lulu, who pretty much rules the house. Not that we're complaining about that.
View all posts by Silverwynde →
This entry was posted in Transformers, Transformers Tuesday and tagged FML, Holidays, sometimes you have to throw the entire human away, Thirty Five Years Thirty Five Thoughts, Transformers, Transformers: Generation 2. Bookmark the permalink.