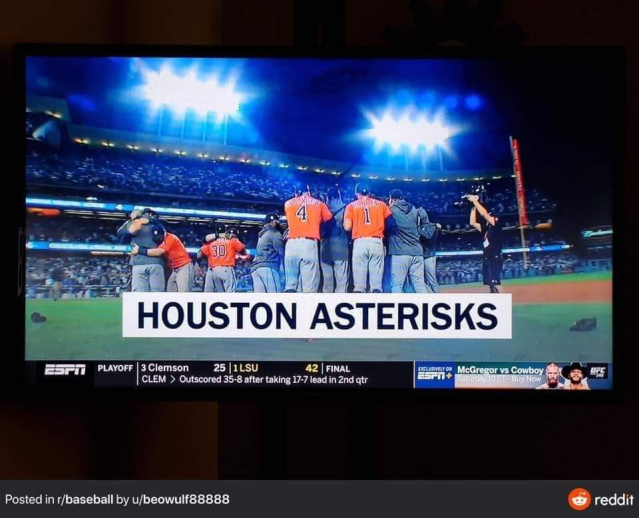 That’s the perfect name for that sportsball team, honestly.

Well, unless you’ve been under a rock for the last twenty four hours, then you know that the teams going to the Super Bowl are the Kansas City Chiefs and the San Francisco 49ers. Green Bay was absolutely blown out in the first half; as to how they could come back and score twenty points is beyond me. But at least the Packers weren’t shut out, so there’s that. However, their season is over. No Super Bowl appearance this year. I’d be lying if I said that I wasn’t disappointed–I am slightly–but I’m not surprised. The Packers didn’t do well against the 49ers earlier in the season; the final result of this game isn’t exactly surprising in that regard.

Apparently, Mike Fiers, the pitcher who broke the Asterisk’s Astro’s sign stealing scandal, is catching heat for coming forward. There are those out there who are calling him a snitch, rather than thanking him. Look, I get it: you want to support your team because they won the World Series. Your team got the championship. But your team also cheated. Your team did unethical shit to guarantee that win. Now, you’re trying to justify that, but think if things were reversed. Think about it: the team that the Astros went up against stole their signs and used that knowledge to win the World Series. You’d be pissed and you’d see the player–whoever they might be–as a hero for breaking the news. So, do yourselves a favor here. Stop giving Mike Fiers grief. He did the right thing. It’s the Asterisks Astros who are in the wrong. Yes, it sucks admitting it, but you’re better off accepting it. Take it from someone who knows. (I had to deal with Ryan Braun and his use of PEDs years ago. Trust me, dealing with a cheater on your team absolutely sucks. Especially when that cheater performs better on the banned substances.)

This Sunday is Brewers on Deck. I have the day off and I’m going; Monday’s post will probably deal with that exclusively. Expect pictures, at the very least. Excited? You better believe it. I wasn’t able to go last year, since the event sold out. It’s been at least one year too damn long for me. Hell, I think the last time I was there, Sammy was still with us. So yeah, it’s been a while and I have sorely missed this.

Today was low-key and quiet. We weren’t terribly busy and most of the members were in pretty decent moods. I was a little skittish about coming in today; when I worked at Walmart, we dreaded the day after a Packers loss. None of the customers were ever in a good mood and simply saying “hello” would earn you a bitchy reply. Yeah, that was not fun at all. Even worse? Sometimes the stupidity started just as the game ended. We’d have people coming in after the all was said and done, half drunk and crabby as hell. It was awful. But I really don’t have to deal with that anymore; Costco isn’t open twenty four hours, like Walmart.

I'm a Transformers fan, Pokémon player, Brewers fan and all-out general nerd. I rescue abandoned Golett, collect as many Bumblebee decoys and figures as I can find and I've attended every BotCon--official and non--since 1999. I'm also happily married to a fellow Transfan named Prime and we were both owned by a very intelligent half-Siamese cat, who crossed the Rainbow Bridge on June 16, 2018. We still miss him. But we're now the acting staff of a Maine Coon kitty named Lulu, who pretty much rules the house. Not that we're complaining about that.
View all posts by Silverwynde →
This entry was posted in And Now For Something Completely Different and tagged Baseball, Brewers On Deck, Green Bay Packers, Houston Asterisks, sportsball. Bookmark the permalink.