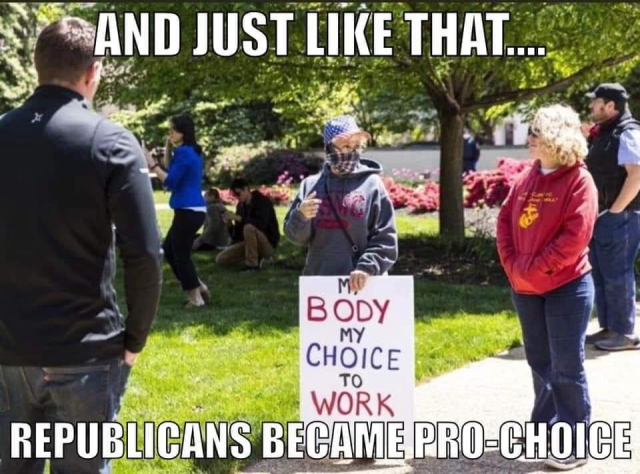 I have to take another break from Facebook and Twitter; the sheer amount of stupidity from the Reopeners and other conservatives is just too much. Add to that the fact that we’re not cleaning the Front End half as much and yeah, I’m done.

I was helping out at the Front End a couple of days ago and when I started cleaning the plexiglass the cashier told me that we didn’t do that anymore. We are cleaning every fifteen minutes unless the member isn’t wearing a mask. But we’re not cleaning after every transaction.

My anxiety skyrocketed. I feel exposed enough, even with the plexiglass barriers, even with my mask. Thankfully, I was sent back to the doors so I was able to calm down a bit.

Then, there are the Reopeners.

So many people on social media are calling for the country to be reopened, but we’re not ready. All that will happen is more people will get sick and possibly die. Essential workers like me could fall ill and die.

And no one cares. If you don’t believe me, just read some of the comments on Facebook. Read the tweets. All that these Reopeners care about are the value of their 401k, and their stock portfolios. I should die to keep them financially secure.

Like I said, taking a break. I just can’t even anymore. If anyone needs me, I’ll be hatching Eggs in the hopes of finally getting a shiny male Ralts. Catch you later.

I'm a Transformers fan, Pokémon player, Brewers fan and all-out general nerd. I rescue abandoned Golett, collect as many Bumblebee decoys and figures as I can find and I've attended every BotCon--official and non--since 1999. I'm also happily married to a fellow Transfan named Prime and we were both owned by a very intelligent half-Siamese cat, who crossed the Rainbow Bridge on June 16, 2018. We still miss him. But we're now the acting staff of a Maine Coon kitty named Lulu, who pretty much rules the house. Not that we're complaining about that.
View all posts by Silverwynde →
This entry was posted in And Now For Something Completely Different and tagged #DeleteFacebook, #FacebookIsTrash, anti-social media, Fuck you Twitter. Bookmark the permalink.