I found this via Reddit’s “Am I the Asshole” subreddit. It’s… uh, it’s quite the read:

Me F26 and my husband M25 got married a year ago, I’m the kind of person that really like celebrating special occasions that are important to me, before my husband and I got married he promised to take us somewhere nice on our first wedding anniversary, and since my wedding was an absolute disaster-thanks to my in-laws (mother in law to be specific) I saw this as a chance to have another special day to celebrate my relationship with my husband, but things have been rough the past few months I’m 5 weeks pregnant and our whole plan changed.

My husband suggested we have dinner at a nice restaurant that HIS MOM picked for us (??) And…recommended, okay now she’s trying to get involved this year too, anyways, he showed me pictures and the type of food they serve and asked me to pay, it’s an expensive restaurant, I suggested we pick another but he insisted, I agreed and once we got there I found that the menu wasn’t there which was weird because I was ready to order, about 15 minutes of my husband stalling, His parents walked up to our table dressed nicly and sat with us, I looked at my husband for an explanation but he avoided me to tell his mom that the food they wanted was ordered ahead, his mom immediately made backhanded comments about my hair,dress, WEIGHT, and didn’t stop.

I was literally mad, she and her son started drinking while my father in law started talking to me about “politics”, the final straw was when she canceled the cake I wanted and replaced it with the one her husband liked, I got up, told my husband to hand me the keys or I was going to walk, he tried to calm the situation that’s when his awful mom started talking about me acting inappropriately, she told her son to “just hand me the keys” cause she didn’t want me to embarrass her.

I left, an hour later, my husband came home, started berating me for overreacting and ruining dinner, I yelled at him what the F was he thinking inviting his parents, he said they paid for it so he had to invite them, started arguing saying that he saw nothing wrong with what he did, he didn’t even tell me and argued about how I was being awful to his family, I went to my mom’s after he insulted me and I been feeling bad eversince, his mom texted me but I ignored her. 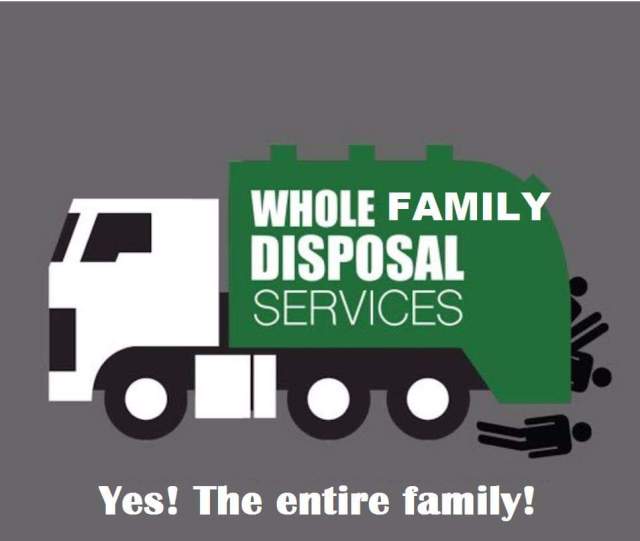 Yes, the whole family. That’s pretty much what most people are saying. I agree.

This will never not be funny.

Alright, where do I start here? Because this is a bit of a trainwreck, to be honest.

First off, why did you marry this guy? Honestly? Because it already sounds like he’s an absolute Dumpster fire of a man and he’s not going to get any better. It’s glaringly obvious who runs things in Hubby’s family and you’ll never be able to compete with that.

How do I know? Because that was my ex. Quite literally, his family took priority over anyone or anything else. If his mother said “Jump”, he didn’t just ask how high but was he using the correct foot. When he and I had plans together for the first time in weeks, his sister said he was going to her boyfriend’s lake house and I wasn’t invited. He didn’t protest. If he was out, he had to call his mother and check in with her. Did I mention that he was 23 at the time?

That was my life. It sucked. Because I knew he didn’t have spine enough to say “No” to his own family. I’d be on the back burner and if I dared protest, then I would be the selfish one.

Now, you’re in a worse situation than I was: you’re pregnant. Sure, you’re only five weeks along, but this changes a lot of things. A lot of people are saying that you should terminate. I don’t blame them. But first of all, remember: that is entirely your decision. If you don’t feel that’s your best course of action, then don’t. However, you have to remember that your child will share half of its DNA with your husband and he’ll probably demand visitation. Which means that child will be exposed to your rather toxic mother-in-law.

You see where this is going, don’t you? It’s not pretty.

Now, you might be able to fight and get some custody, but most of the time the courts pull the “A child needs both parents” card so the odds are against you. It might be better for you in the long run to terminate now, rather than dealing with the headaches later. (That’s why I’m very glad I never got pregnant during my previous relationship! It would have been a nightmare!)

But the bottom line? You need to get out of this marriage. Immediately. Your mother-in-law ruined your wedding, your mother-in-law ruined your anniversary, and your husband did dick-all about either situation. Hell, he even blamed you for getting upset on your anniversary! Your husband doesn’t value you as a person, let alone a spouse. He will never change. He has no desire to change. So it’s best to get out and get out now.

I know. It’s tough. You love him. When he’s not around his mother he’s a good guy. But he doesn’t care about you. Not in the way you deserve. So walk away now and find someone else who can be the man your husband simply never will be.

I'm a Transformers fan, Pokémon player, Brewers fan and all-out general nerd. I rescue abandoned Golett, collect as many Bumblebee decoys and figures as I can find and I've attended every BotCon--official and non--since 1999. I'm also happily married to a fellow Transfan named Prime and we were both owned by a very intelligent half-Siamese cat, who crossed the Rainbow Bridge on June 16, 2018. We still miss him. But we're now the acting staff of a Maine Coon kitty named Lulu, who pretty much rules the house. Not that we're complaining about that.
View all posts by Silverwynde →
This entry was posted in And Now For Something Completely Different and tagged And today in WTF, Are you effing kidding me?, Are you serious?, Reddit, relationships. Bookmark the permalink.