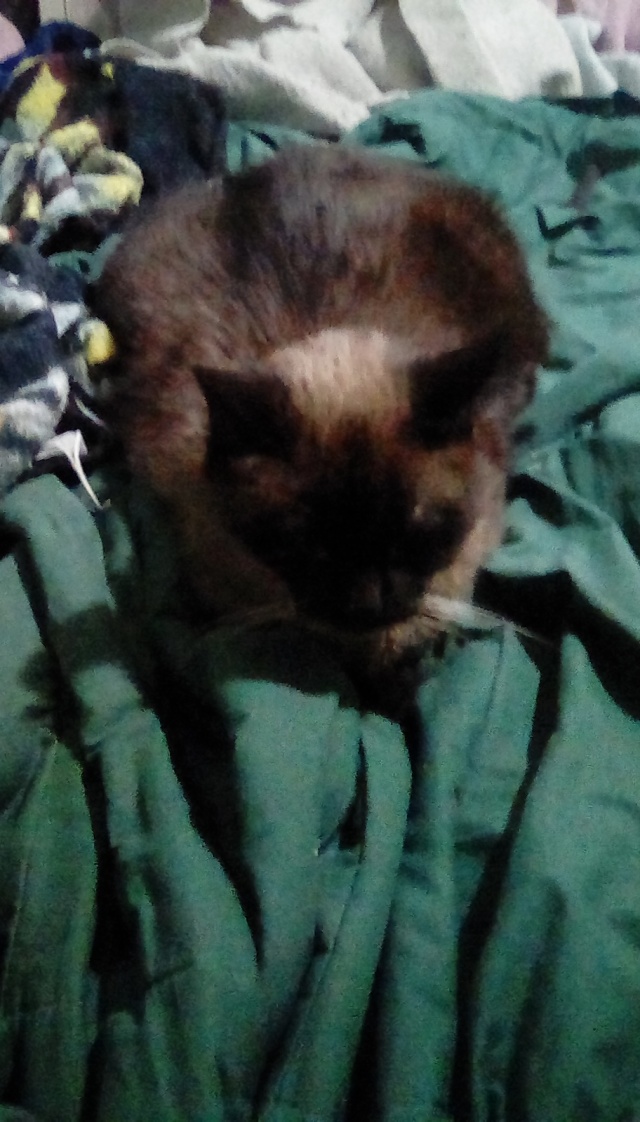 Sammy Nightprowler Prime, the best friend and beloved furchild of the Silver Defense team, crossed the Rainbow Bridge today, June 16, 2018, after a brief illness. He was seventeen.

Sammy was known by multiple nicknames–mostly given to him by his cat mother, Silverwynde. He was known as Sammers, Whammy, Whammers, Cat-Butt, Cat Bucket, Cat Biscuit, Kitty Butt, and Little Butt-biter, among others. He was a cuddler, loved to have his ears “scritched” by Prime, and divided his time between his humans, snuggling with both.

Sammy was an intelligent kitty, and was trained to sit as well as “crate up” when asked. Never a finicky eater, he enjoyed his Iams kibble, various and sundry wet cat foods–Rachel Ray was a favorite–as well as the occasional treat of a Culver’s cheeseburger, a can of tuna, sardines in Louisiana hot sauce (stolen once, freely given thereafter), or his mother’s grits if she wasn’t finished with them yet. For fun, he’d jump into the bathtub while it was filled with water to retrieve his little toy jingly balls, he’d open cabinet doors and drawers with an innocent expression on his face and loved to destroy rolls of toilet paper, much to Prime, his father’s, chagrin.

Sammy brought joy to the lives of the Silver Defense team on a daily basis. If Silverwynde had a terrible shift at her Wal-Mart, Sammy would wrap his paws around her neck to hug her. He gave headbutts to Prime and acted as an alarm clock for Silvy. He chewed up shower curtain liners, swatted cell phones off of counter tops and loved to purr in his parents’ ears.

He was a goofy, lovable character, who was the light of his parents’ lives and he will always be missed.

Sammy entered the lives of the Silver Defense team by jumping into Prime’s arms and left their lives in the same way: in the arms of his dearest friend and father, Prime. He leaves behind a cat-shaped hole in their hearts, one that might heal but can never quite be filled.

“I love you, Cat-Butt. Now, forever and always.”